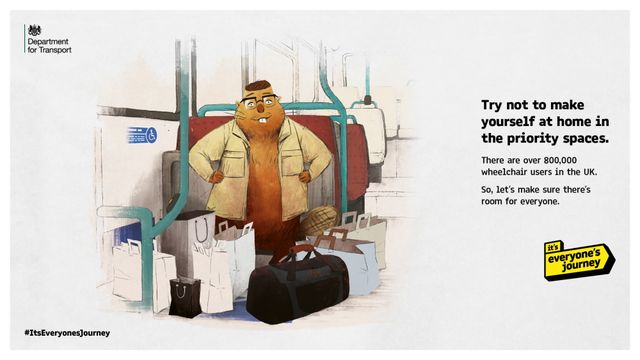 A new “it’s everyone’s journey” campaign has been launched by the government to increase awareness about making public transport more inclusive to those with disabilities. A series of posters and videos have started to appear around the place, including the one above.

With 1 in 4 disabled people saying the attitudes of other people prevents them from using public transport, it’s clear that this campaign is needed. The intention is to encourage people to reflect on how common, and often unconscious, behaviour can impact on others.

The series of posters and videos address such matters as hidden disabilities, mental health conditions, and keeping the wheelchair priority space accessible for those that need it (as pictured above).

The hope is to make the UK a “world leader” to accessible travel, but the success of that is likely to take some time to judge.